My STAR WARS - How it all started.

Yip, I was the kid that played Star Wars out on the farm by myself.  The big old Macrocarpa tree was the Millennium Falcon, and Chewie and I use to fly from planet to planet smuggling goods.  I made a blaster, strapped it to my leg in a home sown holster and hit the skies.  Times were never so good.

I got given a Star Wars colouring book - on one page it had a picture of Luke in an X-wing fighter and on the screen it had a code.  Oh boy, Star Wars language!  Turns out it was the code 'pig pen', which doesn't sound that great but is actually a pretty cool code and - STAR WARS!

It got me interested in codes and then ciphers.  Its great for kids to use, and it's also great for parents to use to send messages to them.  The idea is to cultivate an interest in alternative message systems.

The real fun, and learning, occurs when you begin to change the relationship between the two codes.  For example, the most common structure is that below. 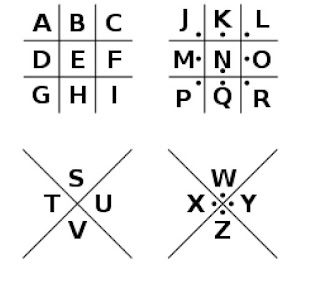 However, you can change the letter relationship to create a challenge for the reader.  Just be sure the letter placement is not random and the reader will be able to use a letter frequency strategy to solve the puzzle.  In other words, because 'e' is usually the most common letter, by identifying the most common symbol, it can be solved pretty quickly.  For example, in the code below, if you did not have the key, you could identify the most common symbol (an 'L' looking shape) and determine that it represents an 'e'.  From here you could deduce the position of the other letters.

I might write another post on this - called 'Code busting - turning your kids into analytical code breaking machines - and how this will help them conquer the world'.

Anyway, I've included a variation of the code below.  This version is used in Assassins Creed.  It's a little more complex, but still fun.  Good luck. 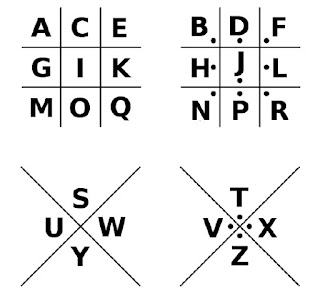 A bit rough - but you get the idea. 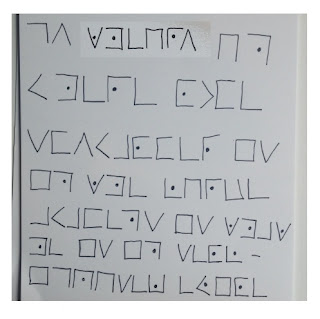