Why are there multiple answers to Facebook maths puzzles?

Why are there multiple answers to Facebook maths puzzles?

Don't those Facebook maths challenges seem strange - a single equation and about 4 different responses.  Everybody is confused (except the smug few)!

I mean, how the heck could they think it was zero when I got 56! And how did Larry Johnson get 50?! What is he stupid? And then it turns out Larry Johnson was right and you are stupid.  Hate that.

Time to change your luck with a maths secret.


Those equations that seem so arbitrary actually tell a story. And they tell great stories!

For example, take this equation and try and answer it:

It is definitely one and not the other because the equation describes a very distinct series of events - a story. But the sequence is governed by BEDMAS not by the sequence the equation is written in. BEDMAS basically says to prioritise the multiplication and division sections before addition and subtraction.

So put brackets around the multiplication and division sections and solve these first.


So back to the story that the above equation tells.

You may be wondering why the story doesn't go like this:

Once upon a time a girl was given 4 dollars by her Dad, then another 3 dollars by her Mum. This happened two days in a row.  How much money does she have?

The reason the first story is 'correct' and the second 'incorrect' is that the little 'x' symbol actually means 'groups of'.  So 3 x 2 means 3 groups of 2.  It does not mean 2 groups of 3, even though this happens to be the same final amount. Make sure you understand this point. 2 x 3 means 2 groups of 3.

Think about how you would draw 2 x 3.

Here it is - two groups of three. 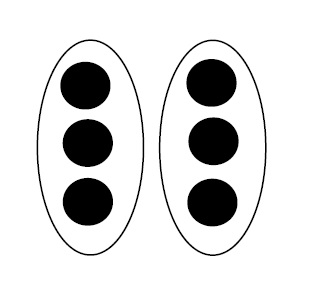 But it is not three groups of two. 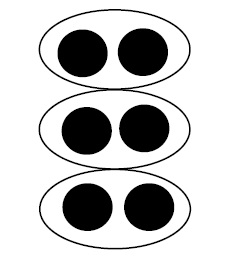 Also 3 x 2 = three tables (groups) with two people at each - but not two tables with three at each.

If I ask you to draw the following 2 x 4 you should draw two groups of four: 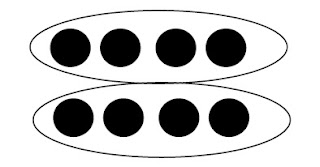 How many groups are there? There are three, not seven. By adding the 4 and the 3 first you change the story.  You change reality.  You change the meaning of life until you only live within the fragmented twisted world of your own imagination!


All maths is a story - those funny little shapes tell a story full of drama and intrigue!

Dana agreed to babysit her brother for three nights at $4 a night.  But blimmin heck, her little brother got his hands on her money and stole $7 dollars.  The tragedy of it all!

Or, how about this human drama:

It's a heart breaker.

Donny had two toy soldiers that he loved and played with everyday. They weren't just those green plastic ones, but steel painted soldiers.


An amazing thing happened to Donny. For Christmas his parents bought him two sets of soldiers, and each set had four soldiers in it! Gotta love Christmas. BUT... while he was outside playing on the driveway, Dad came home and ran over three soldiers with the car. Donny's heart was broken - he loved those soldiers.    How many soldiers did Donny have now? (Do a quick count up).

Okay okay so it's a dumb story. So make up your own darn story.


1. Turn all equations into stories - this will help the maths make sense and actually be meaningful. Get the story right. 'Bedmas' provides the rules. Google it.

2. Tell your students stories, and get them to write down the equation as you tell the story.  This working backward process is fun, and hugely educational.

Here is one for you.

Damon drinks lots of coffee - he does this just to function like a human being. Everyday, Monday through Friday, he drinks eight cups of coffee.  But, on workout days, Monday, Wednesday and Friday he drinks an extra two coffees.  As a final insult to his body, Damon buys a coffee from a shop on the way home Friday night. Will Damon die of renal failure?

Five groups of eight, plus three groups of two, plus one. And yes - he probably will.

To finish, here is 'a' story for the opening problem.


Dale had 7 apples. Someone gave him seven more but he had to share these with six of his friends. Unfortunately, they only got one each. But at least he still had his original apple plus one more. Then someone gave him 7 packets of apples, each with 7 apples in it! The madness of it all. Because of his good fortune he gave seven of those apples to his mum. Because he loves her.


How many apples has Dale got?

If anyone has a better story -PLEASE put it in the comments.
Posted by Desperado at 12:29