For parents of high-achieving girls

Girls are consistently out performing boys across almost all areas of education.  The advantage that boys had in mathematics has largely vanished. 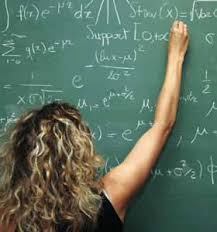 However, one area that girls do have difficulty with is at the higher levels of education, particularly high-achieving girls. What seems to be happening is that girls achieve well, and expect to achieve well. However, the constant success may not have developed the tenacity, or grit, that is required at higher levels of education, particularly in maths. Hence, when the learner fails, and they are not used to it, it hurts.  Often it damages, or collapses, the learner's self-belief about their ability to be successful in the given field.

Some of these learners have not experienced 'fighting out of the hole', and instead feel defeated and as thought they have reached their limit.  Many brilliant people quit.

Here is a sentence from Carroll Dweck that should get your attention:


"What we found was that bright girls didn’t cope at all well with this confusion. In fact, the higher the girl’s IQ, the worse she did."

Contrast this with the average achieving learner who has scratched and clawed their way through, constantly fighting to stay in the game.  They may have developed resilience, persistence and grit -which count for so much at higher levels of education.

Of particular note, is the impact of beliefs on how learners interpret and respond to failure.  Your beliefs as a parent will strongly influence your children, positively or negatively.

Anyway, the link below is to a great article by Carol Dweck.  If you are a parent of daughters, it is well worth a look.

Click here for - Is math a gift? by Carol Dweck

If you are too lazy to read, here is a TED talk by Duckworth about grit.  A great message.