Learned helplessness is one of the biggest problems in adult literacy and numeracy.  It is the creeping, silent, invisible enemy of educators (and parents).  Unfortunately  educators or parents rarely recognize its' impact and they rarely know what they are up against.  They just know that their children or their learners are not learning.

Let me begin be describing what learned helplessness is and how it began.

Once upon a time there were two dogs.  The first was hung up in a harness and subjected to a series of mild/medium electric shocks.  However, the harness was configured in such a way that if the dog touched a plate in front of its nose, the electrical current stopped.  The dog figured this out and when it was shocked it touched the plate.  It learned that it could stop the shocks.

The second dog was hung in the harness and also subjected to the same treatment.  However, this time there was no plate and no way for the dog to stop the electric shocks. This dog learned that it couldn't stop the shocks.  They continued this for some time with both dogs.

Now they took these two dogs and ran an experiment to see if they behaved differently under certain conditions.  They made a container with a small wall dividing it into two parts. The dogs could easily step back and forth over the wall, but could not escape the container. The floor on one side of the container was a steel plate allowing electricity run through it. Any dog standing on this side would receive electric shocks.  However, before the shock was administered a light would begin to dim warning the dog of the shock.

When the first dog entered the container it stood on the steel plate and received a shock.  It immediately jumped to the other side of the container and stayed there.  It quickly recognised that the shocks were preceded by the dimming of the light and moved as the light began to dim, therefore avoiding the shocks.  It repeated this behaviour in a variety of different containers - always responding to the dimming light and moving to avoid it.

The second dog however, was very different.  When this dog received a shock, it did not move.  It just hunkered down and continued to receive the shock - always, even when safety was one step away.  It did not respond to the warning (the dimming light).  It did not believe it could make a difference.

You see, the point is, they trained the second dog to be helpless.  They trained it to believe that it would get shocked no matter what it did - so it did nothing.

The question then turned to this: - Can the same thing happen to people?  Yes

Mathematics classes actually recreate the conditions necessary to develop learned helplessness.  The way they do this is complex.  However here is a simplified example, a learner begins to fall behind in a class, he stops understanding most content but does answer some questions correctly here and there.  The learner takes some action to improve.  They may ask a friend for help, ask the teacher to repeat the problem, go home and repeat the classroom problems and so on.  However, if the learner still continues to struggle they begin to get the sense that nothing they do actually makes any difference.  They sit in class and become bamboozled by the content, occasionally getting some things correct but generally failing repeatedly.   When they do get questions correct they attribute it to the work being easy, and when they struggle they attribute it to being too hard.

Sustained failure cultivates learned helplessness until it becomes self-perpetuating - at which point they are lost.

The end result is that these learners stop trying the moment things get a bit tough.  They will give up trying in the face of any difficulty and relegate the content as too hard.

Key characteristics are expressed by this advertisement. 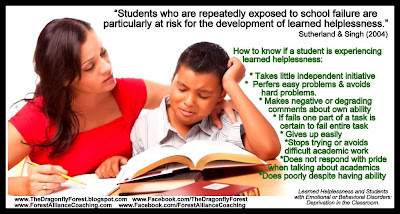 Anyway, I didn't want so much to describe LH but rather to give you a checklist.  The list below will describe it better than I can.  I have stolen it from a wonderful researcher named Shirley Yates (2009), who tested it to see how reliable and valid it is.  Use it to think about your learners, children, or self.  I am going to write this in the masculine to save time (no sexism intended!)  Think about your learner while they are doing maths.


The idea of these items is that you rate each one on a five point scale (1 = not true - 5 = very true).  The higher the score the more indicative the learner has LH.   However, I think that if any of these ring slightly true for you (regarding your learners) you need to act immediately.  Once LH is established the consequences are serious and persistent.

Look at the reversed statements (numbers 4, 6, 8).  These are what you want to cultivate in your learners/children.  In fact if you do - it is the greatest gift you can give your child.