Anatomy of a pretty stink lesson on the Pythagorean theorem Despite planning well, having some reasonable materials and a good story (the history of Pythagoras) today's lesson was less than inspiring.

So what went wrong?

Well, the older students were unable to attend because they were sitting an assessment.  So I had a class of younger learners who I felt would rather be somewhere else.  It was after lunch (the dead zone) and the other students were going to go home early.  Many were thinking about their imminent escape to freedom – Not about a potentially life changing lesson on the Pythagorean theorem!

However, my job is to get their attention by being interesting and relevant.  Despite having a pretty funky little lesson planned I didn't really manage it.  Here is what I did:

1.  My first activity was to fold an A4 piece of paper into a square.  This would set the stage for a discussion of right angles and the hypotenuse.  About two-thirds did it – the rest didn't care.

2.  I then asked who knew about Pythagoras and how he related to the activity.  A few had heard of him but no one really knew.  I told the heck out of that story – cults, murder, violence, numbers, meta-physics and the nature of reality.  It was good people, it was real good.

3.  I handed out a grid.  The idea was to find the smallest square (1 by 1), then the next, then the next until we had the square numbers.  This was to clarify ‘squares’ and exponents which I know most of the class is confused by.  Unfortunately, what happened was various people in the group became distracted and talked through that little bit.  I pressed on.

4.  Question to class: Is the Pythagorean theorem just some maths thing that you never use in real life, or does it have a real usefulness in your life?  Excellent – we came up with lots of practical examples – including one to do with a support beam in the classroom.  This rocked.

5.  A few worked examples on the board.  Bit boring.

6.  Find the hypotenuse of the classroom window.  This was a good excuse to draw on the window (hey, all the greats did it!).  I measured the top as 8 and the side as 5 and let them find the hypotenuse in groups.  They did it!  With support.  Then another, then another.

Sounds okay right?  But about four students are at the end of the room just cruising and mucking about.  I felt that I didn't make my points and they didn't make sense out of it as they should.  I need to rethink this lesson.  I’ll have a second shot next week. 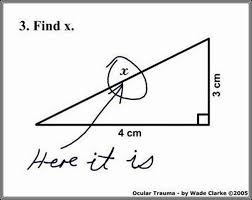 So, any ideas for teaching Pythagoras?  Please let me know in the comments.  And, have you ever taught this without just ‘telling’ and ‘showing’ students?  If so, please give me some hints!
Posted by Desperado at 21:43