Or “You want to try something stupid?”

After reviewing my assessment data it is evident that there is a general lack of knowledge around place value.  Most learners are best represented by Step two/three. The target vocation is engineering.  Let's get busy.

In the last lesson we introduced the place value system and the outcome related to understanding that the quantity increases by a factor of ten as progress up the place value chart. The activity use to generate student thinking was the washer activity.  In a nut shell:
A company makes washers and has large orders to fill.  They decide to package and send the washers in tens.  That is ten washers are wrapped in paper called a ‘packet’, ten packets fit within a ‘box’ and ten boxes fit on a ‘pellet’.  The activity was to work out how to send various amounts.  Learners were to make links between the place value chart and the packaging technique.

The activity was a success.

This week we repeated this activity and then shifted to what is described as Step three knowledge.  Learners need to know how many tens and hundreds in numbers to 1000 and the place values of digits in whole numbers up to 1000.
Building on the washer activity we added a new scenario.  Customers are ringing the washer company asking questions about their orders.  The questions include the following:


These questions really got the learners thinking.  They started to really discuss these problems for the first time.  This requires Step three knowledge but really can be quite challenging.  I had large pictures of the quantities on the board – a washer next to a packet, next to a box, next to a pellet.  It was a nice visual representation of the place value chart.
Following this the learners linked the whole activity to the place value chart. Very successful.

Ah, this one was risky!  This activity is designed for kids but ROCKS for teaching the place value for digits.  I talked it up – “Hey, you want to try something stupid?”  Everyone was in!

I took five volunteers (the youth of course!).  Each stands in front of the class and holds an A4 sheet with a single digit on it.  As they are lined up it makes a number.  For example, 24,578.  A learner yells out a number using those digits (87,542) and the volunteers have five seconds to rearrange themselves to make the number.  If they can - they survive the round.

So the learners sitting in class have to take those digits and rearrange them into a number (and say it properly) and the volunteers have to move fast to make it.  Three groups are seated and one in front of the class.  Swap out after three or four times. Great game – really worked well!
Next week I’ll add a decimal (the dot) and the game will become more complex.  You can easily add people (the numbers get bigger) or have groups make the biggest number and so on.

As the learners are standing at the front of the class, it’s a good excuse to play 'knock down'.  Each number must be reduce to zero by subtracting the correct amount.  I say to the class ‘knock down Jake’ and the class must look at the ‘place’ Jake is occupying and subtract that amount.  For example, in the picture Jake is holding a 5 that represents five-thousands.  So the learners must write down ‘minus five thousand’.  When they get this correct – I hand Jake a sheet with zero on it.  Then I say knock down Phil, and so on.  This gets fun if you decide to have a very large number. 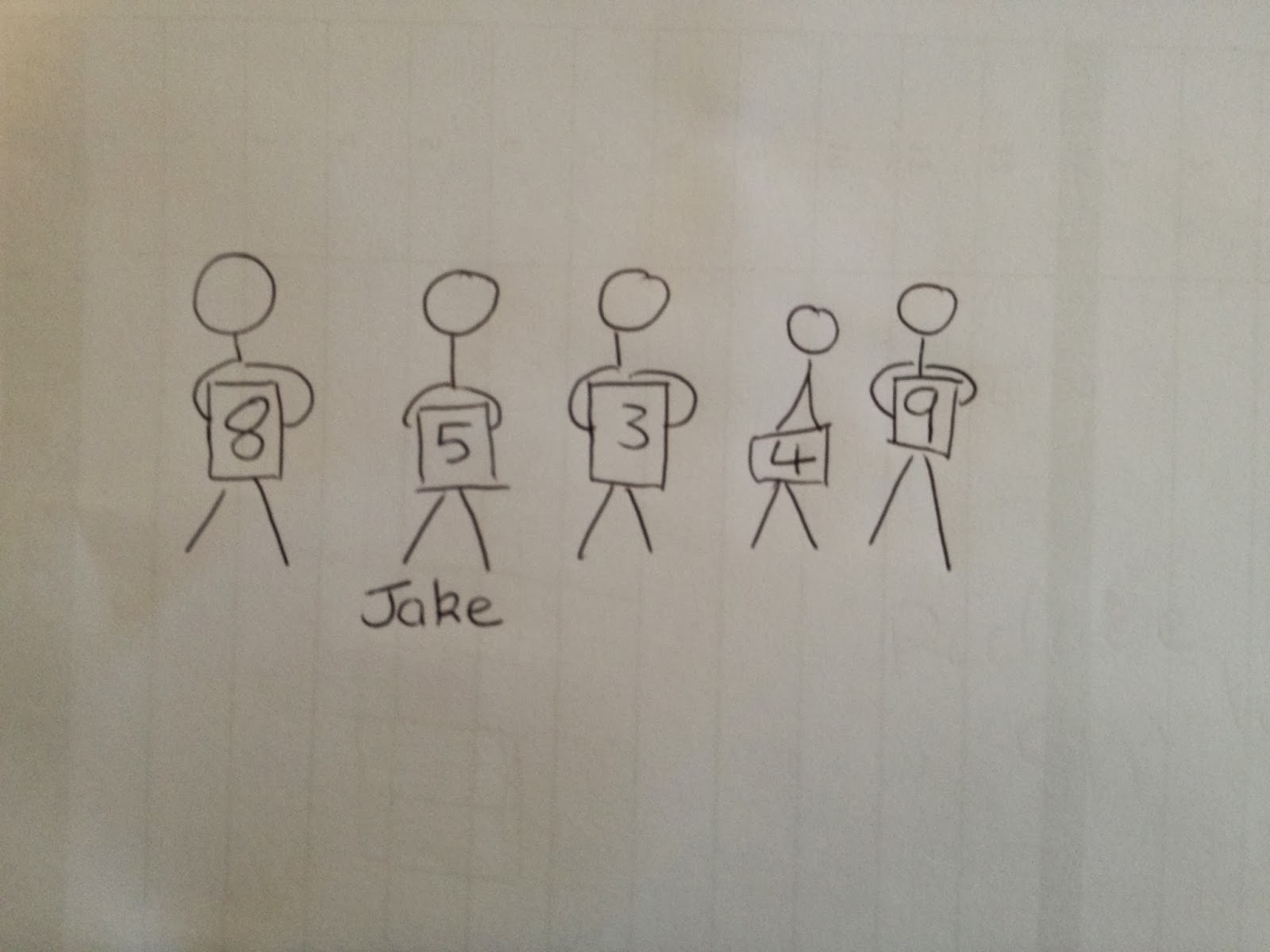 I am not an artist - forgive me.
Anyway – I kept this activity short – five minutes at the max and then we moved on to the final activity.

Activity four - Bet on it

I wrote the following numbers on the board:


And asked which is the biggest number?
Groups then bet on which is bigger.  I take their bets and then make the two numbers on the ground.  First I make the 1.7 by laying down one A4 and then 7 tenths.  Then right next to it one A4 and six tenths.  At this point I get their interest and hear things like “oh, that’s how that works”.
We repeat – which is bigger?


Place your bets!
You get where I am going with this.  I introduce the hundredths.  They guess and then they see.  By round three everyone is winning – every time.

I then ask them to mentally visualise what each number will look like.  They are able to look at the number and visualise the quantity of paper.  It's the ability to visualise the decimal numbers that makes this such a powerful tool. 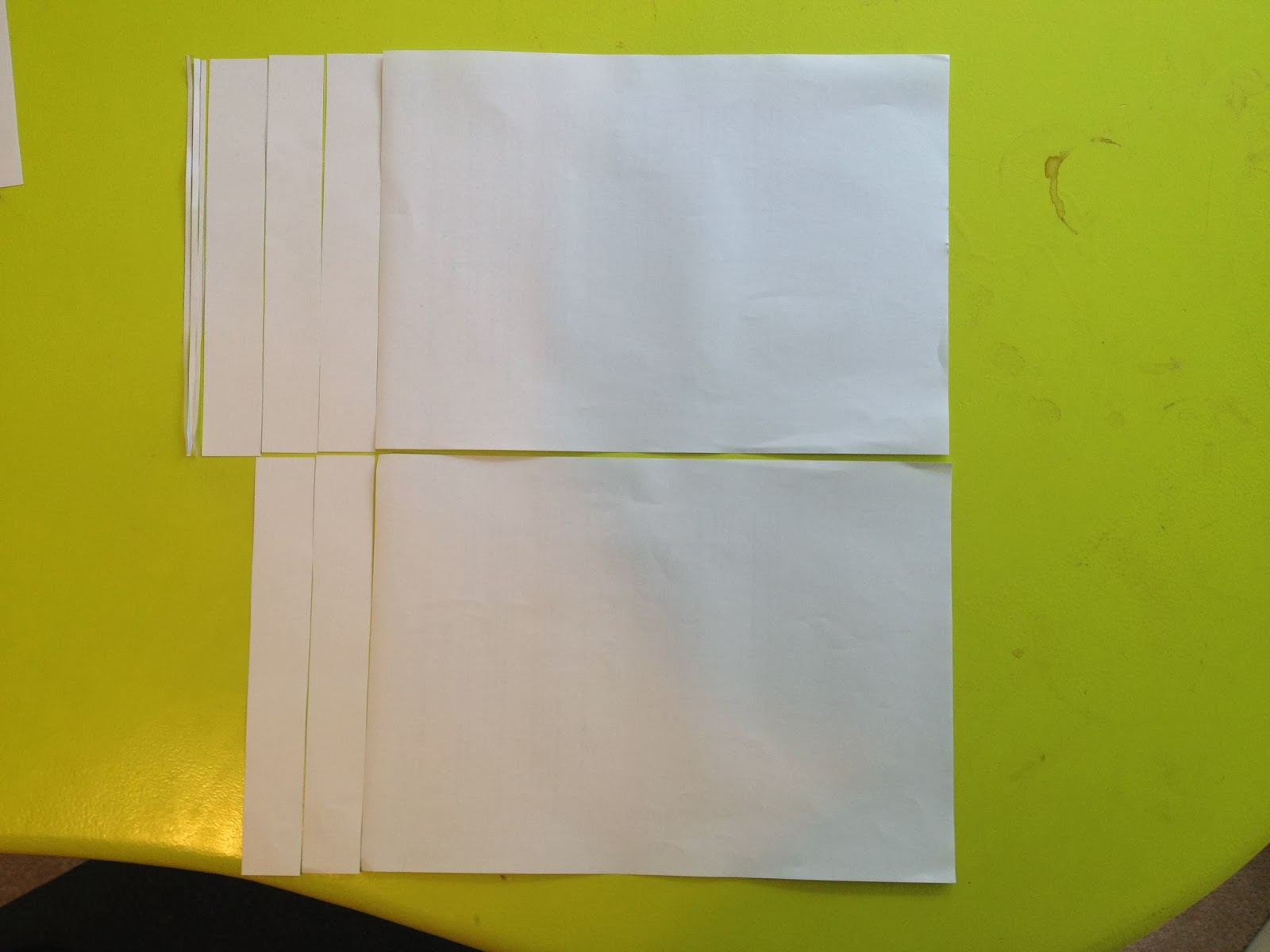 Tomorrow I will write the numbers on the board and they will make them on their tables.  My master plan is to increase the size of the paper so a ‘whole’ is one metre, tenths 10 centimetres and hundredths one centimetre.  When this is easy for them I’ll over lay it with a measuring tape and we will transfer our place value knowledge to measurement.

Four low tech but effective activities – each building on the other and each developing the right skills at the right time.  Someone will ask why I bother cutting out paper when I could purchase some nice plastic place value blocks.  Well, the truth is I've used paper and blocks many times.  The paper works better!

The goal is to get learners thinking and making meaning - it doesn't need to be pretty.