I have spent the last few months analyzing the data from a series of interviews I did with adult learners.
The one overwhelming finding is: Self-worth is tied up with academic performance - especially mathematics. Moreover, some environments are far more prone than others to enable judgements to be made about your worth (both by you and others).

Societal beliefs about what mathematics is and what it means to be good or bad at mathematics has damaged some of us.  And may still be doing so.

I'm trying to put into words how maths classes were described.  This is a rough start but perhaps this tale will help generate some thought about the impact social-pressure can have on us.

John has just turned 13.  Today is his first day at High School.  He is excited to meet new people and take part in what others are doing.  He is really looking forward to taking part in classes.

John has a positive view of himself, he is capable, inventive, gets on well with others and loves to play and have fun.  John is excited about going to maths class, he loves solving problems, talking about maths and enjoys reading about famous mathematicians like Aristotle.  His mum bought him a shiny, tidy new work book and he received an exciting text book.  The new pencils, pens, rulers and calculator made it even more exciting.

On the first day of maths class he noticed the teacher would ask the class very direct questions.  He quickly realised that they weren't real questions because the teacher already knew the answers - they were more like mini-tests, however, he had a go at them  - his hand usually went up first.  When he answered, the teacher just carried on, as though the answer had come from his own mouth -but it felt good to answer, and the teacher seemed to approve.

One time, he answered wrong, and the class laughed.  He noticed that they laughed 'at' him, not with him. They didn't laugh because he was funny or had made a joke.  In fact, he wasn't sure why they laughed, but it didn't feel good.  It made him feel 'alone', for a moment, different, a sense of 'outsidedness'.  This didn't happen at his old school.

Another time he answered a question in what he thought was a conversation with the teacher.  He realised too late that the teachers' question had been rhetorical.  He also answered with the wrong numbers. Other learners laughed at him again. One of them called him a 'dummy', but in a funny sort of way.  No one else had tried to answer.  Maybe he was breaking the rules about when to speak?  Why did they laugh?  Perhaps because he was so wrong, so surprisingly wrong, that it was funny?

He didn't want to be laughed at anymore.  He wanted to laughed 'with'.  So when a different student answered incorrectly - he laugh 'with' the others.  He stopped answering questions himself - rather he waited until someone else answered first and then he checked if he was right.  Often he was wrong, but so long as he didn't share it, it didn't matter.

John found that two worlds developed -his own world of math, conducted in his head, or perhaps in his now private book - and the public math, the math that occurred around him as he spoke to other learners and engaged with the teacher.  Two domains to think about math, one private and one public.

Often he got things wrong in his private world, and hid it.  Often if he was wrong, and no one knew it, he would subtly rewrite the answer in his book.  If he wrote it lightly in pencil he found he could erase it and leave no smear marks.  But other times, as much as he tried to hide it he couldn't.  The teacher would ask him for answers directly and he had to give his answer to the whole class.  Sometimes they had tests and everyone found out how everyone did.  He would try and hide his score but someone would always ask.  To not tell would show you cared.  But that 'dummy' word stuck with him.  He wasn't sure why, but it came up again.

He stopped enjoying maths, the class felt like a test and at stake was his reputation, his very self.  But outside the class he was great, especially away from school.  It gnawed on him though.  He was good at sports, and enjoyed some other subjects.  English wasn't too bad.

What he didn't understand was how he could be confident outside class but be a dummy inside the maths class.  Which was he? Confident or dumb. 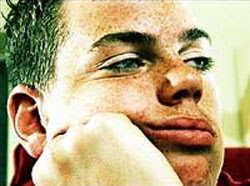 He concluded that he was only dumb in the maths class.  That when it came to maths, he just didn't have it. But being good at maths means you are smart, so being bad at it means..?  This was too painful, so he told himself that maths wasn't his 'thing'.  He told his mum, "I'm good at sport but not maths.  Maths is for geeks anyway'.

John is struggling to construct a single coherent identity.  He wants to be strong, smart, capable of exerting his strength and getting things done.  But in the maths class he is positioned as the opposite, he can't be the guy 'who gets things done' and be the guy who is a dummy.  He can't be the dummy and the doer.  And hence there is a conflict between two identities.

John emotionally disconnects from maths.  He stops caring - because he has to.